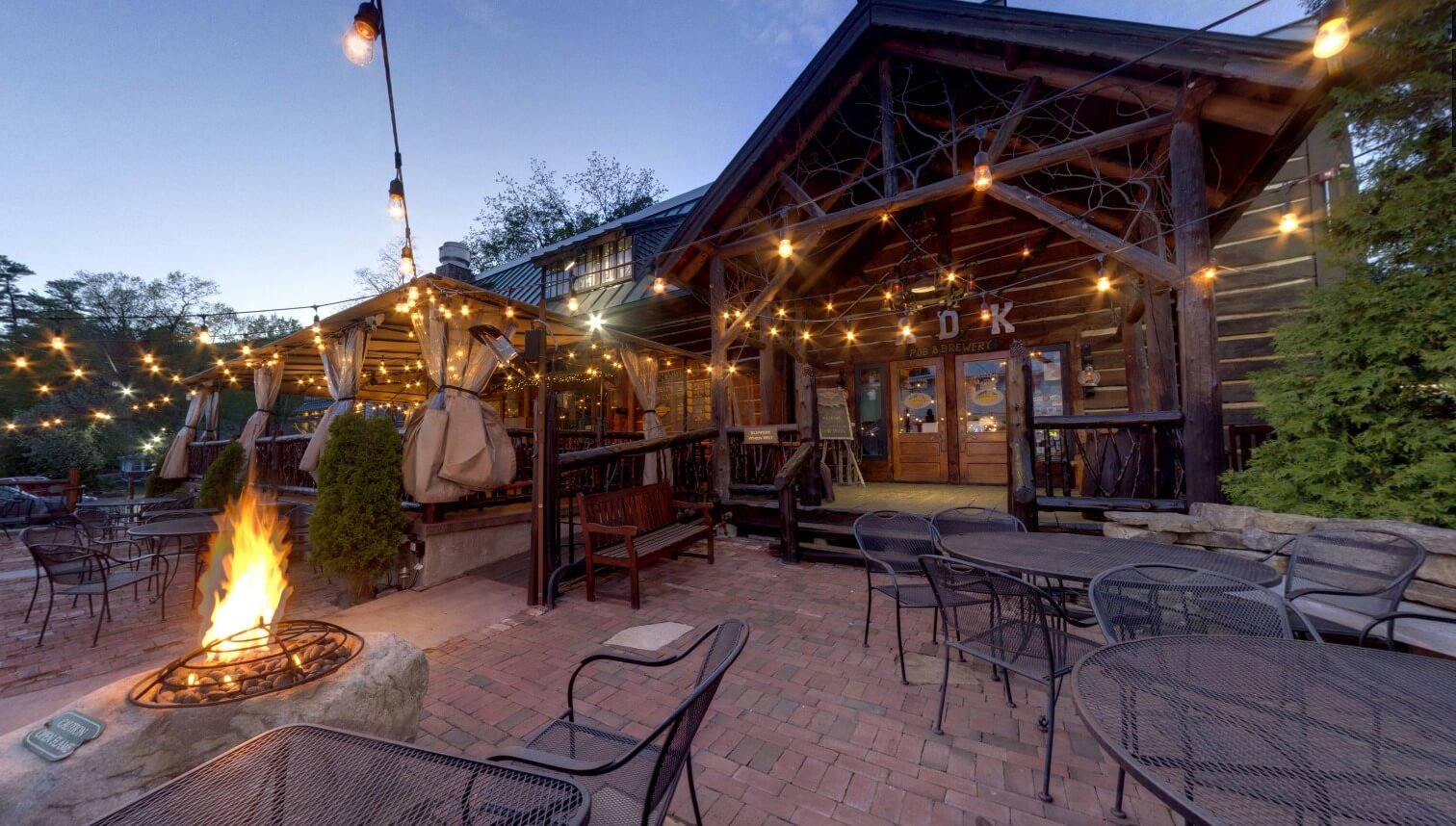 Adirondack Pub & Brewing Welcomes All Back to Lake George

The barstools are back at the bar at Lake’s George’s Adirondack Pub & Brewing! When you step into what feels like an Adirondack lodge, your shoulders relax, and you’ll want to breathe a deep sigh of relief that a more normal life has resumed. Whether you’re just stopping in just for a cold beer or are there for the full dining experience, a visit to Adirondack Pub & Brewing will make it seem like the pandemic never happened, save for the bottles of house made hand sanitizer on every table.

Staff is happy to see locals at the bar enjoying a carefully brewed craft beer without making a food purchase (although the menu has a great selection of appetizer, entrees, and desserts) and is fully prepared for the height of the tourist season when close to five million visitors make their way to the “Queen of American Lakes, taking in what the lake and it environs have to offer, including great, locally made craft beverages.

Founder John Carr spent a summer backpacking around Europe after college in the 1980s. When he returned to the United States, he could not find beer that compared to what he drank across the pond, so he became a home brewer. He did this for a decade before deciding to open a brewpub in the center of the Village of Lake George in 1999.

The brewery grew quickly and earned microbrewery status in 2013, producing an average of 5,000—and up to 7,000–barrels of beer, cider, and seltzer per year in its 20-barrel Bohemian Brewery Imports system on site.

Over the past couple of decades, Carr has kept his focus on high standards for the beers his seven brewers create. The brewery has its popular flagship beers, including the first brew it ever produced, Bear Naked Ale, an amber beer made with caramel malt, its Lake George IPA, a NE IPA made with tropical fruit, citrus, and pine flavors, and Bobcat Pilsner, which won the 2018 World Beer Cup Silver Award. The Lake George IPA is made in “waves,” as brewers switch up the hops they use every three months to keep it interesting for customers.

In addition, brewers place a heavy emphasis on smaller batches, creating seasonal releases, like its popular summer brew, Tangerine Dream, a light and fruity tangerine-infused ale, and heavier, darker stouts and porters for the colder months, such as its peanut butter porter. Even when seasonal beers reoccur, they have a different taste. For example, this summer’s Tangerine dream is “way more orangey and fruity” said Ian Quillinan, who does design and marketing for the brewery.

Each gleaming fermentation tank holds a different beer. Smaller tanks might hold experimental batches that brewers are giving a trial run so that they can work out any kinks and make sure the beer has a balanced flavor.

The brewery also makes its own hard ciders and seltzers, and as a nod to its family-friendly atmosphere, there is made-on-site “Bear Wizz” root beer for the under 21 crowd or grownups who enjoy a good old fashioned root beer float.

Adirondack makes all its beverages with Lake George water, which is piped directly into the brewery and filtered, although Quillinan said that the water does not require much filtering since Lake George is one of the cleanest lakes in the country. In fact, the lake consistently places on lists of the cleanest water in the world, thanks to lake protection organizations around the lake that work to ensure its water quality. That, coupled with New York State ingredients, gives Adirondack’s products a truly unique local taste. Staff bottles or cans all products on the premises.

Adirondack distributes its products throughout New York State, except for New York City.

From the start, Carr designed the establishment to be a social experience, pairing great craft beer with food. Although “pub” is in its name, and there certainly are pub food-type offerings on the menu, such as sandwiches and juicy burgers, customers can enjoy a substantial variety of upscale dishes as well. For example, the healthy-option Carne Asada Salad features marinated skirt steak from the nearby Kilcoyne Farm, with fresh greens, red onion, tomatoes, black beans, and queso fresco. The dinner menu includes beef, barbecue, chipotle, chicken, and seafood entrees, as well as soups, salads, sandwiches, and burgers.

Even the “pub fare” is upleveled with gourmet touches. The grilled chicken sandwich has sliced brie on it and is accompanied by a chipotle ranch sauce for dipping. Chefs top the barbecue chicken entrée with Adirondack’s own peach bourbon barbecue sauce, and they make the pork belly mac and cheese with a gouda cheese sauce topped with a sweet onion barbecue sauce.

Some customers come in for a beer and an appetizer, hanging out in one of the pub’s more casual seating areas. The appetizer menu includes traditional fare like chicken wings, nachos, and mozzarella sticks, but also offerings such as poutine, fried cheese curds in a pretzel coating, and brussels sprouts sauteed with onion, bacon, and dried cranberries, topped with goat cheese. A wildly popular (and some say not to be missed) appetizer is Adirondack’s eggplant fries, topped with a balsamic glaze and large pieces of shaved parmesan accompanied by a hot marinara sauce.

If you still have room for dessert, the sweets menu won’t disappoint. There’s the Adirondack apple crisp, New York Style Cheesecake, and chocolate lava cake, to name a few. Families can make their own s’mores right at the table, toasting marshmallows over a tabletop “campfire” and assembling them fresh on the spot.

All menus include vegetarian and gluten-free options.

If this menu has your mouth watering, you can call ahead for seating so you do not have to wait a long time when you arrive.

Although it’s located in an area noted for high seasonal activity, Adirondack does a substantial year-round business, attracting mainly customers from a 30-mile radius during the “off” months. However, when late spring hits, the place is bustling with activity, and the restaurant is uber-prepared to accommodate the anticipated influx of summer visitors in four different seating “zones.”

Inside the restaurant is one zone, where there are traditional tables and booths in addition to bar seating.

The patio area, which is now available at full capacity, is a charming, covered place for outdoor dining, with lights hanging from the ceiling. It’s a great place to dine with the wind providing a pleasant breeze. When inclement weather comes, staff rolls down vinyl “walls” to protect customers from the elements while still offering this cozy dining setting.

Another zone, the “Biergarten,” is a more casual seating option featuring a large fireplace and four smaller fireplaces that mimic charcoal firepits. While this area is uncovered, there are umbrellas. The Biergarten lens itself well to sampling a flight and trying an appetizer.

The fourth zone, which Adirondack has dubbed “The Campground,” was born of COVID, when more customers were seeking outside seating. Staff turned a portion of the parking lot into a seating area with picnic tables and umbrellas. This year, the Campground got an upgrade, with a sand-colored paint job on the ground and umbrellas for the tables and picnic tables. This area has a separate menu with appetizers and a couple of sandwiches along with beverages, from which customers order at the bar and food “runners” deliver to their tables. Staff is working on expanding and upgrading this seating area.

Outdoor seating areas are dog-friendly, and the pub provides special dog bowls with ice water for its canine customers.

Adirondack Pub also has an events space on the upper level of the restaurant, which it rents out for events, offering a bar and buffet-style food.

Just as Carr pays close attention to the quality of his craft beverages and menu items, he has just as much attention to detail in the interior and exterior design of the Adirondack Pub.

The place oozes with rustic Adirondack charm, which is evident the minute you pull into the ample parking area. A grain silo on the exterior of the building signals customers that they are at a brewery. Those familiar with beer making might even spot the hops growing in a planter alongside the building (although they do not use these hops for brewing).

The entrance to the log cabin-style structure gives customers the sense that they’re about to enter an old-style Adirondack lodge. The railing of the patio looks as if it was assembled from slim tree trunks and gnarled branches, and there are large pine cone finials throughout the establishment.

The décor provides customers with a visual cornucopia of Adirondack antiques, such as partially constructed canoes turned upside down and strung with lights, old advertising signs, vintage snowshoes deer antler chandeliers, and maps of Lake George and New York State made from slices of slim tree trunks. One table even has a couple of trumpets hanging down over it

Adirondack even carries the theme over to its glassware, which features Adirondack animals such as bear, wolves, and fish, with funny quotes to go along with them. Customers can purchase souvenirs like these pint glasses, t-shirts, hoodies, and other swag in a shop just inside the entrance of the pub.

When COVID hit and the restaurant was forced to close, Carr kept his waitstaff, most of whom work there year-round, employed by switching his nearby High Peaks Distillery over to hand sanitizer production. In addition, he donated hand sanitizer to area businesses and healthcare facilities. Now, there are hand sanitizer stations at the restaurant, as well as the bottles on each table. Carr did not lay off any staff during the pandemic.

Adirondack makes the safety of customers and staff the top priority. “We were really safe during COVID and conscious about what we were doing,” Quillinan said. They had fewer tables and on-ground signage, as well as features that encouraged customers to be as safe as possible, such as a sign on the inside bathroom door that suggests customers use their foot to open the door, directing them to a fixture at the bottom to facilitate that. They even offer customers a trifold brochure entitled “Commitment to Safety,” which outlines what staff does, in plain view and behind the scenes, to keep people safe, such as hiring a dedicated sanitation worker, as well as letting customers know what they can do while they’re at the pub.

If you’re ready to emerge from the COVID cocoon, put the Adirondack Pub & Brewery on your list. “We’re definitely a perfect place to ease back into a kind of normalcy, seeing things and interacting with people,” Quillinan said. For those who come to the region for horse racing at Saratoga, Adirondack Pub & Brewery is a shouldn’t-be-missed destination, and a great place for Mondays and Tuesdays, the track’s “dark” days.

Those who enjoy whiskey can take a walk across the parking lot to High Peaks Distillery, a business that Adirondack Pub & Brewery owner John Carr opened five years ago.

In a small tasting room, customers can sample single malt whiskey, straight bourbon whiskey, rye whiskey, and maple whiskey bourbon made with maple syrup from Warrensburg. Distillers make all spirits on site using peated barley imported from Scotland. They barrel age it in the basement of the building in white oak barrels, with some spirits first aged in oak and then in wine barrels.

You can also try cocktails made with High Peaks’ spirits at the Adirondack Pub & Brewery.