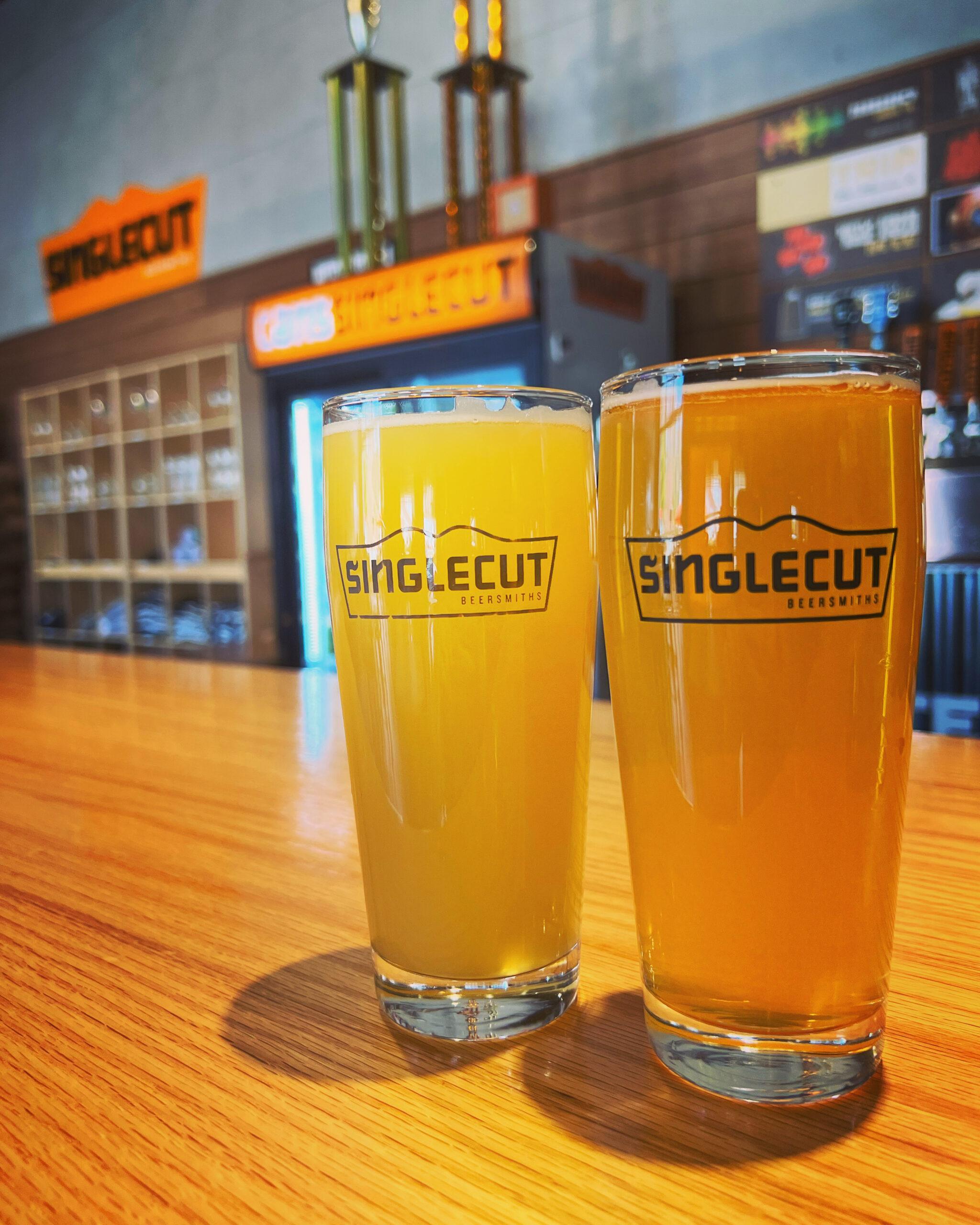 SINGLECUT BEERSMITHS-Music to our Beers 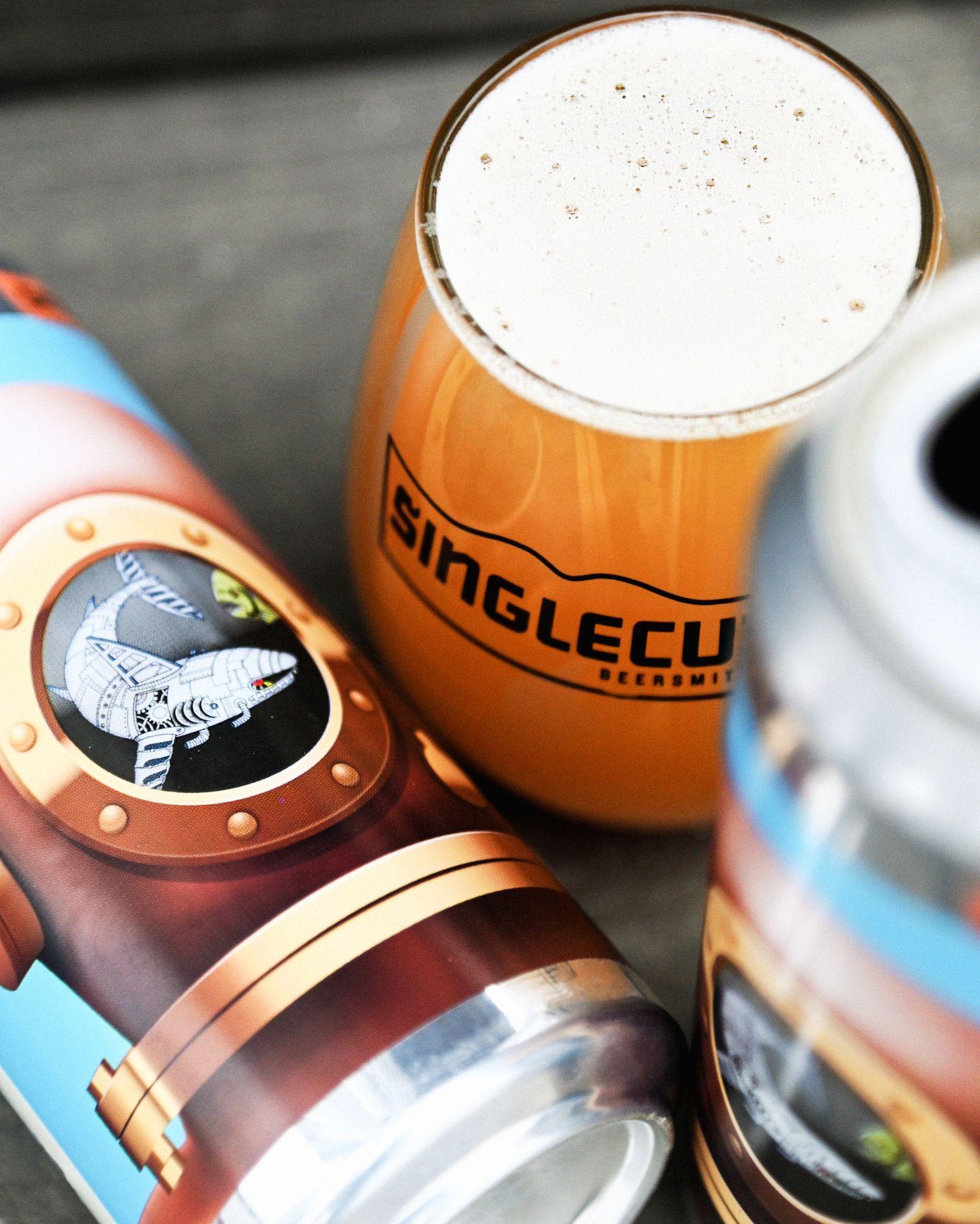 In December 2012, Rich Buceta created his dream career by combining his passion for beer and music, opening SingleCut Beersmiths in Astoria, Queens. To accommodate the growing business, he purchased the former Schmaltz’s facility at Fairchild Square in Clifton Park five years ago. Now, in this 40,000-square-foot production and consumption facility, which is eight times larger than their Queens location, Capital Region residents and visitors can enjoy hop-driven ales and lagers, among a variety of other craft beers.

What can people expect besides great beer at SingleCut? Customers experience a casual, friendly, hip environment that beckons relaxation and connection. There’s music playing in the background and a shelf full of games like Bananagrams to play with friends or family. You can also order a huge soft artisanal pretzel from Brooklyn’s famous Sigmund’s Pretzels, as SingleCut brings them up right from the city. On weekends, you can order food from a rotation of various food trucks to enjoy while taking in some live music. For trivia fans, SingleCut is the only place outside of New York City to host the NYC Trivia League on Thursday evenings. A room for private parties and meetings is also available for groups.

The atmosphere and what ends up on tap is entirely intentional. Buceta started SingleCut, named for a style of guitar, with three basic goals in mind. At the time, there were few choices for freshly made IPAs in New York City. “New York City was always a little bit behind the beer curve,” explained Dan Bronson, general manager for both the Queens and Clifton Park facilities. “We wanted to have a home for super-fresh IPAs in New York City.”

Buceta also saw an opportunity to fulfill a niche for fresh lager. “Lager was at an awkward stage,” Bronson said, noting that it was not a particularly hip style of beer. To that end, SingleCut imported horizontal lagering tanks to make the beer “low and slow” in the traditional way. The brewery experimented with what Bronson describes as “crazy” ingredients, such as Szechuan peppers. It made barrel-aged, sour, heavily spiced, and even a nitro lager. “We were taking our rock and roll ethos and putting that into the beer,” he said. “It was quality, but a little bit brash, bold. We wanted not to be limited by the definitions of a genre or style. We wanted to explore everything we could put into a pint glass.” Their lager production continues with a mix of traditional as well as “outrageous” styles. SingleCut’s flagship “Frequency Lager” won a silver medal in the “Contemporary American-Style Lager” category at the Great American Beer Festival last year.

The third goal was having music in the taproom as well as an influence on beer creation. The joke was that the brewery was created just to have a place to store all of the records and guitars, Bronson said. “Live music is a huge part of our DNA,” he said, noting that staff members are musicians, too—drummer, bassists, and guitarists. “Rich Buceta is a shredder on guitar.”

Live music had been placed—necessarily—on hold during the height of the COVID-19 pandemic, but now it’s back on tap once a week.

In the taproom, staff plays music on vinyl, a decidedly more labor-intensive way to have music, but worth it for SingleCut’s crew. “There’s a warmth and fidelity that comes with a great record player and great records,” said Bronson, as he described the process of listening to albums, first all the way through the “A” side before flipping them over to the “B” side, a vinyl lover’s ritual. “It translates over to craft beer, taking the time for working and having a craft experience.” 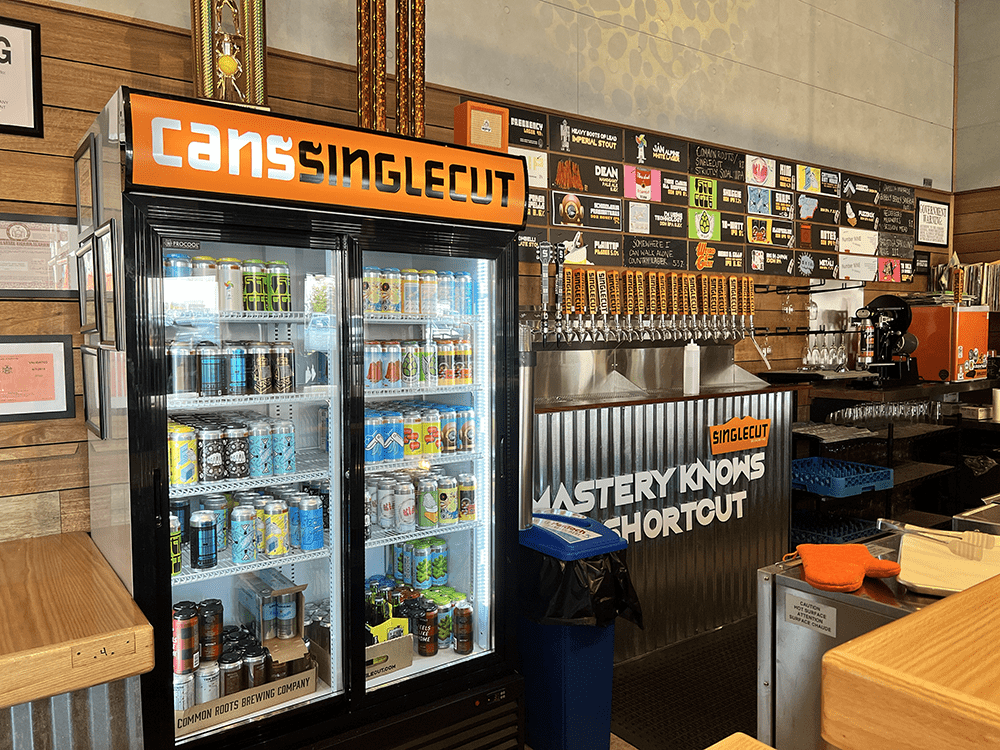 While the taproom at SingleCut is a great experience, what happens behind the scenes before the beer makes it to your lips is impressive also.

Since its inception, SingleCut has created 225 different beers. The first beer was “Dean,” formerly known as “Dean Pacific Northwest Mahogany Ale.” This beer, which remains one of its seasonal offerings, is a hybrid of a red ale, brown ale, and west coast IPA. Released on the same day was the brewery’s first ever true lager, “1933 Lagrrr,” a now-retired traditional pilsner inspired in equal parts by Czech and German beers. The “1933” speaks to SingleCut’s address in Queens.

In the beginning years, the ideas for beer creations came from Buceta, but recently, SingleCut’s seven to eight brewers have become involved. Bronson notes that very few beers have been made only once. Out of the roughly 225 beers that they’ve created, rather than

just taking one shot at a new flavor, brewers go back to refine and perfect a beer. The company’s motto is “Mastery knows no shortcut,” and it is written on the front of its Queens building four times. “At the end of the day, if you want great results, you’re going to have to put in a lot of work,” Bronson said.

Much of the inspiration for its beers comes from the music that staff loves to hear. For its “Genre Series” beers, brewers used the similar base from a double IPA recipe, and then tweaked about 20 percent of the rest for each of the beers to taste like staff feels when they hear particular music, a form of synesthesia. “It’s a cognitive phenomenon where senses get mixed up in a nice way,” Bronson said. “When you hear a kind of music, you might be able to imagine a beer that tastes like that music. We build those beers out to reflect how we feel about those genres of rock ‘n roll. The beer is delicious, and if it gives us an excuse to listen to some of the bands that we haven’t had in rotation for a while, that’s a win-win.”

The production process starts thousands of miles away with a trip to hops farms in the Pacific Northwest. “The sourcing of our malt and hops is incredibly important,” Bronson said. “We’re layering very nuanced malts to make great, clean, classic lagers.” The sourcing manager and a brewer visit where the ingredients are grown, rolling and smelling hops to pick out batches for their beers. Bronson points out that no two hop cones are the same. Hops from two fields in different locations on the same farm could be remarkably diverse. “It’s part of that process and respecting our ingredients as agriculture, which is what they are,” he said.

Another aspect is knowing how SingleCut’s houses yeasts are going to interact with the hops. Bronson makes a music-related analogy of the whole beer brewing process to show the importance of each ingredient to the final product. “Hops is the lead guitarist; yeast is the sound system,” he said. “You can’t see the guitars if there’s not that stage of malt setting the base. Everything has to work in conjunction to have that play out.” Diligent monitoring and adjusting of the brewing process is required to produce the results SingleCut wants. “There’s no set thing in brewing. It’s really alive, just like music is. You have to be dynamic, keep listening, and react to what you hear in the audience.” 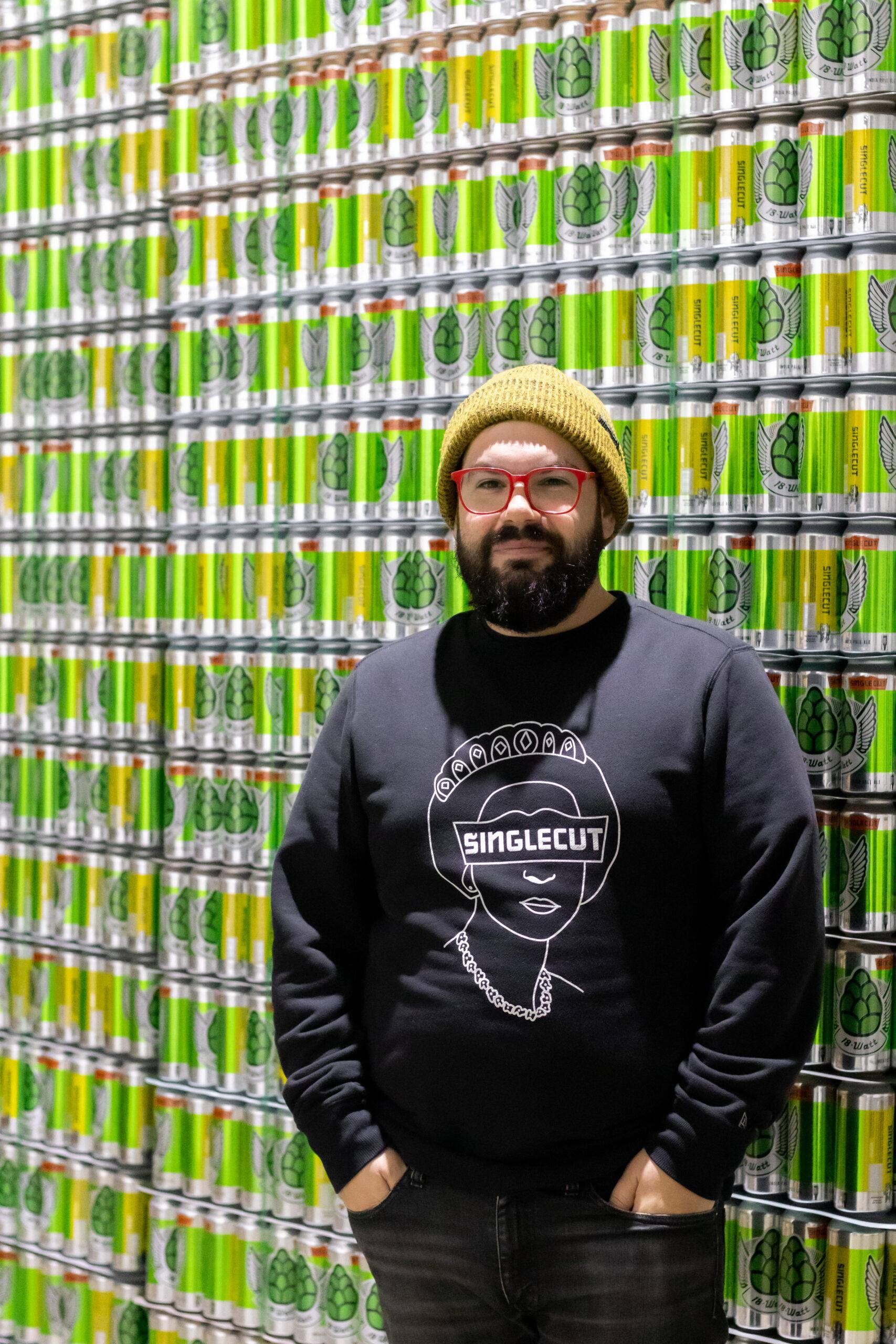 Seven to eight brewers make about 30,000 to 35,000 barrels of beer a year for SingleCut and its clients in a 50-barrel, five-vessel brewing system. With the bubbling sound of brewing beer in the background, brewers oversee every minute detail of the process. Thirty barrels of product go into each pallet of 6,000 cans, which are stacked nearly to the ceiling. The brewery uses between 400,000 and 700,000 cans per year, sourcing them from all over the globe. There are three docks for 18-wheelers and a ground floor dock for box trucks that transport the beers to various retail locations.

In addition to the big brewing tanks, brewers have a “baby tank” which Bronson says, “always has some kind of random fun in it.” Right now, it is a dark sour named “The Origin of Storms,” which has hints of vanilla, caramel, chocolate, and vanilla and is aged in mixed bourbon barrels.

While brewers concern themselves with the artistry of making craft beer, Jessie Smith, SingleCut’s Lab and Quality Assurance/Quality Control Manager focuses on the science that goes into the process. QA and QC drive SingleCut’s production, Bronson said. “The lab is where the most important work happens.”

Smith performs microbiological testing on all the beers every day. SingleCut works on keeping the oxygen levels in a can as low as possible, so the beer is fresher longer. “We crushed it first quarter,” Bronson said, citing a new record for the lowest O2 content yet. Smith also puts the beers in an incubator to age them so that she can determine what will happen in a can of beer three to five months down the road and determine if that meets SingleCut’s quality standards.

Not only SingleCut beers are in the works behind the scenes. SingleCut North offers contract brewing to smaller brewers, which it calls “partners.” SingleCut wants to help microbreweries get their products to customers by sparing them the capital expense of brewing equipment, tanks, and kegs.

Sustainability is on SingleCut’s mind as well. Spent hops go to a local farmer to feed his livestock. The brewery offers a plastic bag recycling program as well as PakTech recycling. PakTech handles hold a group of cans together. While they are made from post-consumer recycled products (think milk jugs) and are recyclable, they cannot be thrown in the normal curbside recycling bin. SingleCut encourages customers to bring them back to the brewery where staff packages them up and sends them back to the manufacturer for recycling. In April, SingleCut sent a crew out to investigate carbon dioxide capture technology that would take the CO2 out of fermenters for reuse in the brewery, another sustainable practice.

SingleCut’s upstate presence is expanding. Later this summer, it will open a taproom in a historic barn in Manlius, New York. The brewery plans to host can popups and releases throughout the winter while staff is winterizing the building so that it can be open year-round in 2023.

SINGLECUT BEERSMITHS-Music to our Beers