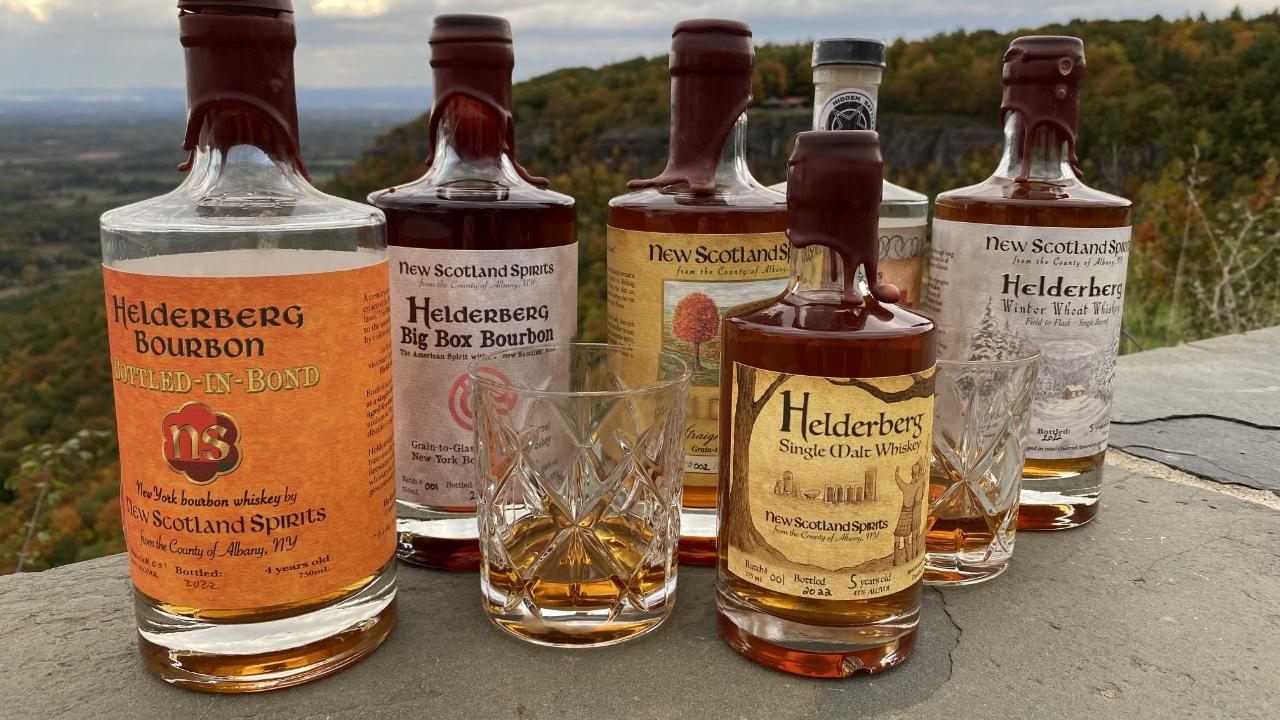 Halfway through a decade-long military career, Albany County native Jesse Sommer—then a U.S. Army paratrooper and officer in the Judge Advocate General’s Corps—had an epiphany: his place of duty was at home.

“My mother had been diagnosed with a degenerative illness, my sisters started having babies, and after bouncing around America from one duty station to the next, I realized that whatever I’d been seeking was actually right back where I left it,” Jesse told me during our interview at the Schenectady Distilling Company. “Once I knew [the Army] wasn’t going to be my career, I had to figure out what to do with my remaining time in service. That’s when it hit me.”

Shortly after the New Year in 2016, Jesse traveled to California to meet with Patrick Carey, a childhood friend who’d taken to home brewing a few years earlier. It was there that they hatched a plan.

“I’d come to see ‘time’ as life’s scarcest commodity,” Jesse said, reflecting on his decision to return to his roots. “But I also knew it to be the most crucial ingredient in a very specific agricultural product.”

AN OUTFIT OF NEW SCOTS 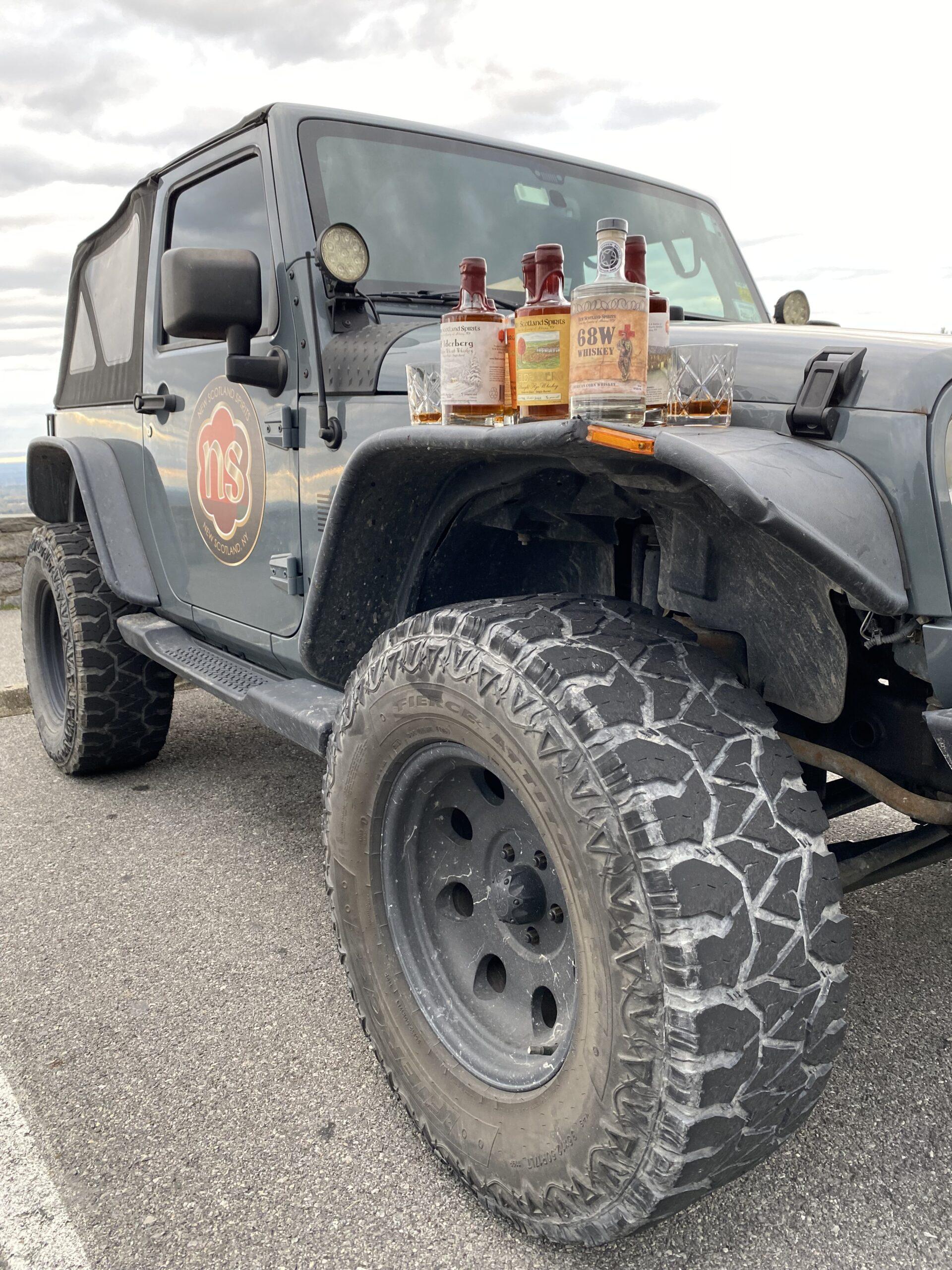 Thus began a five-year journey of preparation, education, and discovery for the team of lifelong friends that Jesse assembled to celebrate their shared hometown of New Scotland, NY. This outfit of “New Scots”—as New Scotland residents are known throughout the County—is composed of several “K-through-12” graduates of the Voorheesville Central School District. Chief among them is Rebecca Smolen Miller, proprietor of one of the Town’s few remaining family farms.

“I didn’t know [the first thing] about alcohol when Jesse called me to ask for several tons of grain,” Rebecca recalled in our recent discussion. “He wanted rye, wheat, corn, barley—it sounded like he was prepping to moonlight as a moonshiner. I was like, ‘um, Jesse, are you calling me from Iraq?’”

Sure enough, in the years following his fateful trip to California, Jesse deployed to combat in both Iraq and Afghanistan with the 10th Mountain Division and 7th Special Forces Group. It was during these rotations that Jesse devised a novel approach to unlocking the distilled “terroir” of upstate New York on a shoestring budget.

OUR COMPANY TOUCHES EVERY CORNER OF THE TOWN

A strict division of labor emerged; Rebecca oversaw cultivation of the raw agricultural materials as Jesse leveraged his legal training to assemble an extensive production-and-supply chain through dozens of commercial contracts.

“We eliminated virtually all overhead,” Rebecca said of the enterprise which now incorporates several New Scotland-based farms, a local barley maltster, and multiple craft distilleries. “We utilized this emerging local industry’s existing capacity and infrastructure, forging friends along the way. That’s why our company name is so apropos. It touches every corner of the town.”

For example, the company’s Distilled Spirits Plant (DSP) license is based at the Albany Distilling Company, owned and operated by John Curtin, a fellow New Scot.  Meanwhile, Jesse’s bottling and labeling operations are based at the Schenectady Distilling Company under the watchful eye of proprietor Ken Gibbons, whom Jesse varyingly calls his mentor and patron saint. The company additionally distills with Steve Osborn at Stoutridge Distillery, Ryen VanHall at Upstate Distilling, Matt Jaeger at Yankee Distillers, and Tyler LaCorata, their first distiller who now owns the South Carolina-based Beyond Distilling.

WE CAN’T AFFORD TO MESS THIS UP

“These guys approach distilling as an art and science,” Jesse said of his network of contract distillers. “They make magic with the part that’s important to us—the stuff that comes from our soil.”

“Our town’s name is on the label,” said Rebecca. “We can’t afford to mess this up. That’s why we’re so committed to quality, why we only release our whiskies after aging them a minimum of five years. We’re not just representing a company. We’re representing a community. Our community.”

The company’s “Helderberg Single Malt Whiskey,” “Helderberg Straight Rye Whiskey,” and “Helderberg Winter Wheat Whiskey” are all 82-proof spirits, in honor of the founders’ birth year. But after being awarded the Gold medal by the Beverage Testing Institute for their “Helderberg Bourbon, Bottled-in-Bond” 100-proof spirit, New Scotland Spirits is preparing 99-proof releases of their signature Helderberg Whiskies—to commemorate the 1899 founding of Voorheesville (a village situated in New Scotland).

Much local media ink has already been spilled reporting on the Scotch Whiskey Association’s aggressive multiyear trademark litigation against the company within weeks of its founding. But with the lawsuits now in his rearview and having finally left Active Duty this past January, Jesse and his ever-expanding team have been reaping what they’ve sown—both figuratively and, with Rebecca’s farm in mind, literally.

“Everyone says ‘success is a good problem to have,’” said Bryan Kafka, while filling and corking bottles by hand during an evening of New Scotland Spirits “bottling ops.” “But success is still a problem.”  Then, turning to Greg Crawford at the label applicator station: “Remember sleep?”

Greg noted to me that he and Bryan had worked seven days per week every single month this past summer. “That’s not an exaggeration,” he was quick to add.

Bryan has known Jesse since their days on Voorheesville’s wrestling team. Now, when not working his day job, Bryan is a powerhouse seller at a wide slew of area farmers markets. “We resolved not to miss any opportunity,” he told me. “We were in seven markets this past summer, four of them simultaneously [on Saturdays]. We couldn’t’ve built a company this large [in personnel], this quickly, with such exhaustive time demands, if there weren’t longtime friendships powering a shared mission.”

To be sure, there are a few interlopers. For example, the company’s graphic artist, Brian McGregor, creates masterful frescoes celebrating cherished views and fixtures around town, though he’s never actually lived in New Scotland. Similarly, Chris Monti, an early investor in the company, is one of Jesse’s paratrooper buddies from the 82nd Airborne Division.  Most recently, his role has been to expand the company’s concept of community to the veteran population, which he’s doing as one of the chief architects of the 6.8-mile Veterans Day “ruck march” fundraiser that New Scotland Spirits is sponsoring on November 11, 2022. 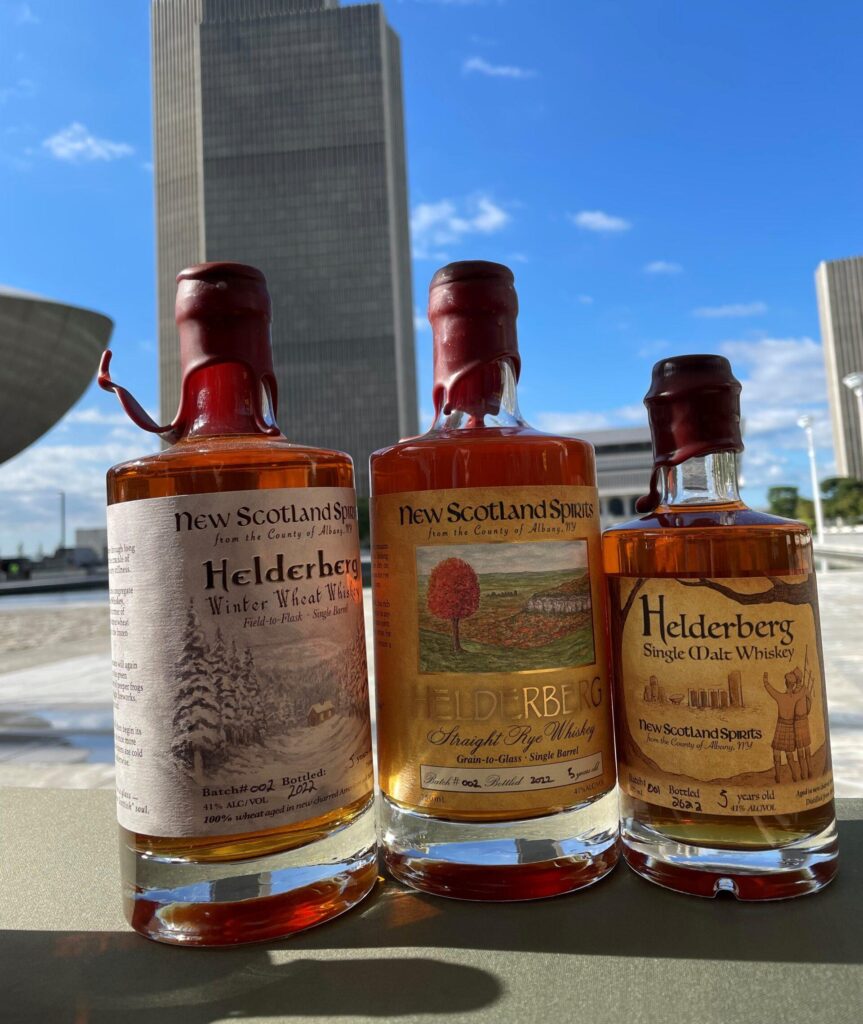 Yet the vast majority of this scrappy distilling concern is local—and multigenerational. Despite being the youngest New Scot on the team, Talia Crisfaulli is perhaps the most vital component of the sales operation which launched this past April. She heads up the retailer outreach effort, and is a major reason the company’s Helderberg Whiskies are already available in more than 70 retail outlets throughout the Capital District and beyond.

WE’D BETTER GET BACK TO WORK

“We couldn’t have anticipated the way our community opened its arms to us,” Talia said. “It’s rewarding. But now we’re struggling to keep up with demand, and looking beyond our borders to source aged product. So while it’s cool Jesse ‘hacked the system’ with his ‘no overhead’ ploy or whatever, it’s also about time he figure out how to build us a distillery.”

When I later shared Talia’s comment with Jesse as the frenzied bottling/packaging activity swarmed about us, he just looked into his tumbler, sighed heavily, and took a sip. Then he shrugged.

“Then I guess we’d better get back to work.”