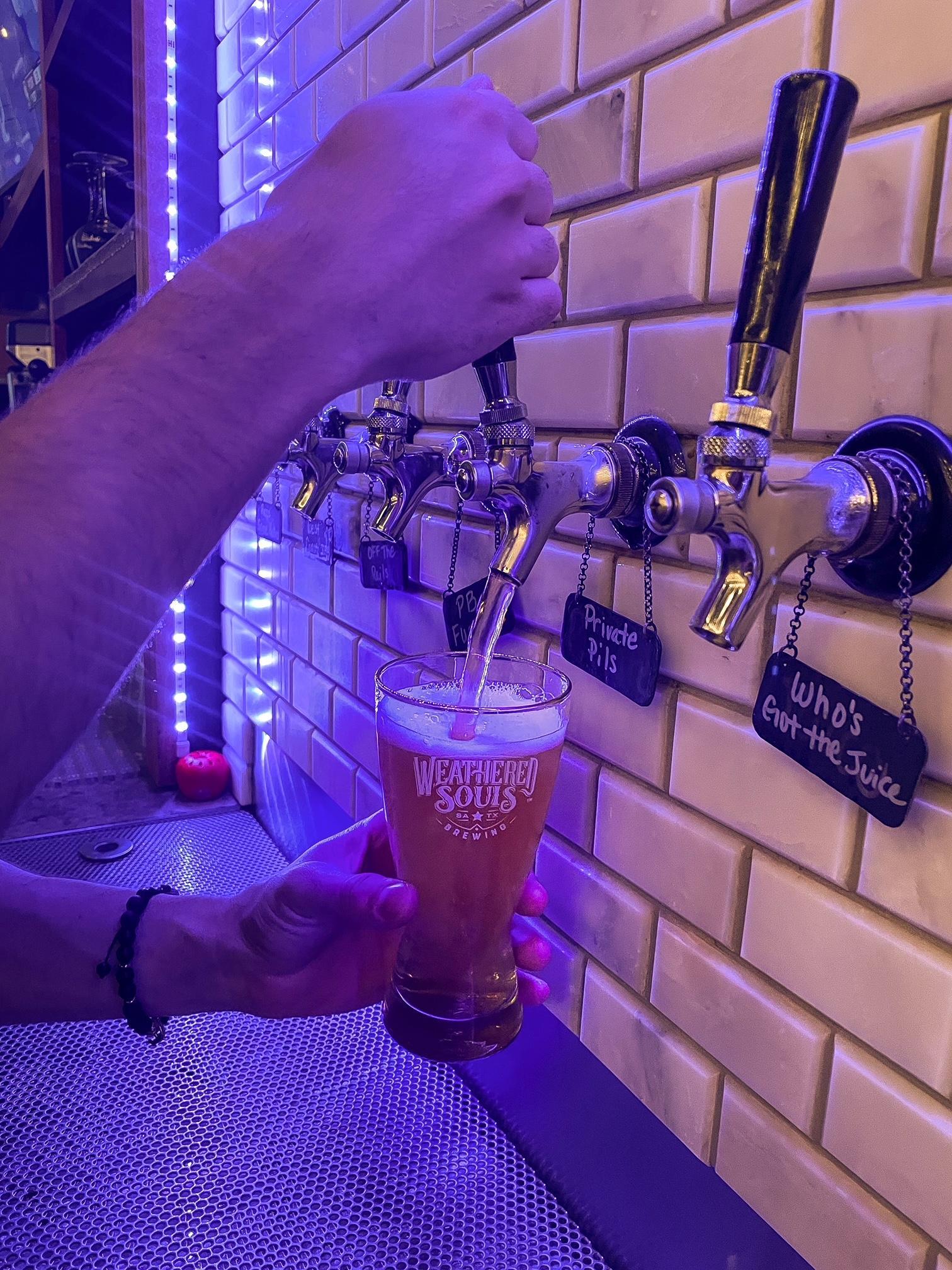 Weathered Souls Brewing, located at 606 Embassy Oaks on the city’s Northeast side, was co-founded by longtime San Antonio resident and businessman Mike Holt, and head brewer/co-founder Marcus Baskerville. The two met in 2014 at San Antonio’s Busted Sandal Brewing Company and meshed right away. Soon after, they began planning for a brewery of their own.

Their first task, finding a location that would allow them to realize their dream, was not easy at first, though nothing worthwhile ever is. After driving down a plethora of streets looking for potential spots, the Weathered Souls crew found that most everything was either sold or not available. But it turns out that an unexpected meeting with Santikos Real Estate provided just what they were looking for.

“At first, we were only looking for one space,” says Baskerville. “When they offered us the adjoining space, we had to take it.” The décor is simple: glossy concrete floors stained brown that matching the marble style countertops, bar, and walls. Food options are handled by South BBQ, whose unique take on Texas BBQ focus is a hit with patrons. Weathered Souls has more than 16 taps of their own beer, including core beers Malterial Girl – an American blonde ale, Dalé Shine – an American light lager Mexican lager, Hardwood Classic – a hoppy pilsner; and West Coast IPA – a…you guessed it, West Coast-Style IPA. Weathered Souls also boasts a popular small-batch program putting out experimental stouts, IPAs and sour beers, as well as barrel-aged offerings that will surely satisfy the beer geeks and craft beer novices.

Holt and Baskerville wanted to have as much contact with consumers as possible, making the brewpub model the obvious choice. “The goal in the beginning is to stay as close as possible to the customer and expose them to as many choices as possible.” said Baskerville. This approach has allowed for organic growth, though the last 18 months have been a challenge.

The head brewer was thrust into the international spotlight

2020 was harsh on much of the planet, with Covid-19 taking the limelight, as well as many racial injustices faced by people of color in the United States. Baskerville wanted to do something about these injustices and felt that as a brewer he had a unique platform. The head brewer and co-founder was thrust into the international spotlight in June of 2020 when he launched his Black is Beautiful initiative, with the intent to bring attention to social injustices faced by people of color through beer.

To go along with the name, Baskerville chose a stout as the base beer and gave other brewers the freedom to put their own spin on it from there. Baskerville reached out to other brewers to see if they were interested in participating with the catch: breweries needed to commit to donating 100 percent of the proceeds from their Black is Beautiful beer to organizations that promote equality. Organizations like Know Your Rights Camp, 100 Black Men of San Antonio, and African American Dream Maker Fund.

What resulted was truly phenomenal. In the first two days alone, 250 brewers signed up to brew Black is Beautiful, with more following daily. Over the last almost year and a half, more than 1,200 breweries in 50 states and 22 countries have participated.

The spotlight the campaign has brought Baskerville has been nothing short of amazing, largely as he still sees himself as a “newbie” to the industry. To put this into perspective, Weathered Souls is about to celebrate its sixth year, and Baskerville got into brewing professionally just a little more than six years ago.

It has been a long road for Baskerville, who hails from Sacramento, California, who originally started brewing at home with his brother and the ever-popular Mr. Beer kit they acquired nearly 10 years ago. He recalls how awful the first couple of batches were, “The first one was bad. The second one was palatable,” he says.

Upon arriving in San Antonio in 2013, Baskerville used money he received from a car accident to elevate his homebrewing equipment, and not his car. Priorities, right? Though not long after he almost gave up brewing all together. What changed his mind?

Baskerville had listened to a podcast on the Brewing Network with homebrewer Annie Johnson “She had just won the American Homebrewers Association 2013 Homebrewer of the year award,” says Baskerville. She was from Sacramento, and she was a Black woman. I looked at that and was like, ‘Wow, there is somebody that looks like me and somebody literally from the same city as me that just achieved the pinnacle of homebrewing.”

Despite feeling like he would never be able to measure up to her success, something inside spurred him to keep brewing. After a successful homebrew tap takeover at Busted Sandal Brewing Co. in San Antonio, Baskerville was offered a job as assistant brewer there. He worked that job along with his full-time job, though his mind was now focused on how he could perfect his brewing.

Mike Holt, who was an investor at Busted Sandal at the time, approached Baskerville about a new venture. The two launched Weathered Souls in 2016 on San Antonio’s Northeast side. As with many businesses, 2020 threw Weathered Souls for a loop, and was by far their toughest year, but Baskerville says Black is Beautiful also made it the most rewarding for them.

Black is Beautiful is meant to be a focus of conversation

He’s hopeful the initiative is affecting more than just beer. Baskerville wants it known that the label for Black is Beautiful and fundraiser do not go hand-in-hand with Black Lives Matter, at least not organizationally. Black is Beautiful is meant to be a focus of conversation, and a project that gives breweries the flexibility to support equality initiatives that speak to them. “It’s a blanket statement,” Baskerville says. “‘Black is beautiful’ is more of a message that you don’t have to be afraid of other skin tones.”

Many breweries in the United States have aligned with Black Lives Matter, and the organization has actually reached out to Weathered Souls, but Baskerville has worked hard to ensure his initiative is not political. “I’ve tried to keep this out of the political field because to me equality doesn’t have anything to do with politics,” he says.

Many of San Antonio’s breweries participated by brewing their take on Black is Beautiful, as did numerous Texas breweries. “As far as the brewing scene in San Antonio goes, it has been amazing,” says Baskerville.

This past February, Wal-Mart added Black is Beautiful, to shelves in more than 300 locations as part of Black History Month. The coast-to-coast release required Baskerville to partner with a few other breweries around the country to meet production demands. Now Wal-Mart carries not only Black is Beautiful, but Hardwood Classic as well.

Weathered Souls was named best brewery in the U.S. in 2020

The project has also brought other accolades. Weathered Souls was named best brewery in the U.S. in 2020 by Hop Culture magazine. This past December, Baskerville was elected to the board of directors for the Brewers Association, the trade association that represents the majority of independent breweries in the United States.

“It’s very interesting,” Baskerville says. “Four years ago, I never would have thought that I would come this far in my career and to be able to represent people like myself within the board. It’s a monumental occasion in that sense, as there are not a lot of young Black males in the industry.” The position started in January and Baskerville hopes he’ll be able to use the platform to help bring more diversity, equity, and inclusion to the brewing industry.

Baskerville, Holt, and the entire crew at Weathered Souls, have taken the challenges of the last year—from the ongoing Covid-19 pandemic to racial unrest and police brutality—and turned them into reasons to hope for years to come. To that end, they have recently announced a second location in Charlotte, North Carolina, a location that Holt and Baskerville had always intended to open.

Though the Charlotte location has a special purpose: it will double as a production brewery, as well as a program that will give opportunities in the brewing industry to those traditionally underrepresented.