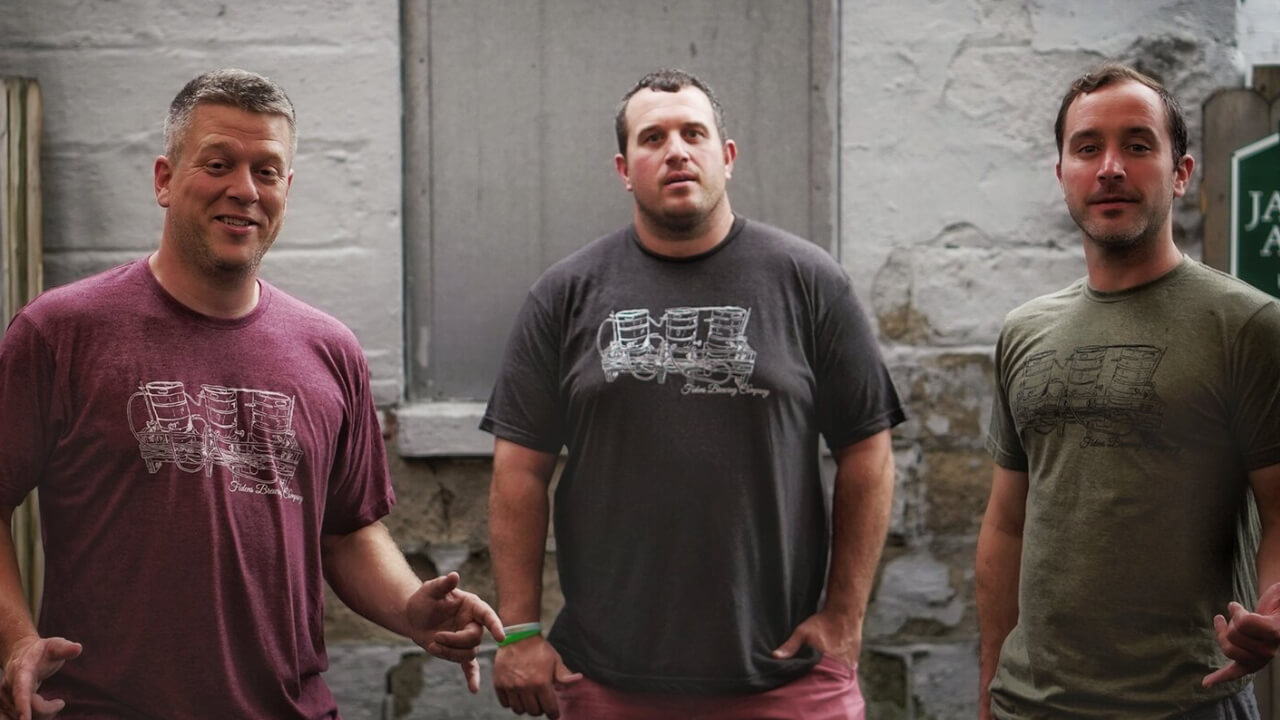 A trio of brewers in Colonie are bold, courageous, confident, and resolute, having taken the leap from brewing beer at home to opening their own commercial brewery. Steve Parker, Tim Pierce, and Michael Carter opened Fidens Brewing Company in September 2019. The brewery’s name comes from the Latin word “fidens,” which speaks to the courage and fearlessness they knew they were going to need to open their brewery.

A common love of beer brought the three friends to the point where they decided to go into the business of brewing beer. “We all collectively enjoyed beer, craft beer, and the style of beer that we brew,” said Carter, who serves as marketing manager. “We decided, let’s take on the challenge to see if we could do it on our own professionally,” he said.

They knew that launching a brewery would take some courage and that there would be a big learning curve. The three co-owners have exhibited this courage as they learned the laws and regulations of operating a brewery, about zoning, how to navigate expansion, and as of March, how to survive a pandemic.

A big part of their business philosophy is to concentrate on, for now, one style of beer with many variations. “We focus on hop-forward beers,” Carter said. They experiment with different hops, which vary in flavor depending on the region in which they were grown. Given that, there are myriad possibilities when it comes to brewing their IPAs. So far, they have brewed about 40 different beers, formulating them based on the ingredients they have on hand as well as what they, themselves, want to drink. “What determines our flavor is curiosity about what different hops can do,” Carter said. “The ingredients are pushing the flavors.”

Their first craft beer and the one that they have brewed the most is “Necessary Means,” an IPA of 6.2% abv featuring Citra and Mosaic hops. This beer has evolved over time, Carter said.

One of the brewery’s more popular beers is “Jasper,” a Double India Pale Ale (DIPA) with 7.8% abv that also features Citra. “From the beginning, people that were finding us were enjoying that beer,” said Carter. Another popular choice is “Eugene’s Ax,” an 8% abv DIPA using Citra and Galaxy hops. “We do a lot of double IPAs in the range of 7.8 to 8.5 abv, and we do some IPAs in the mid-6s and 7.5s,” Carter said, noting that lately, they have been enjoying making hop-forward ales with 5% abv.

Parker, who is the head brewer, likes to read about different processes and ingredients, as well as the latest happenings with hop-forward beers, as he contemplates what to brew next.

Typically, Fidens’ staff brews two to three times a week on a seven-barrel system, having started off with a four-barrel system. “It was a big moment for us about three or so months ago when we went from a four- to a seven-barrel,” Carter said. The brewery, nestled in an industrial park in Colonie, was growing largely via word of mouth. “We had to brew more to keep up with the demand, which was humbling,” he said, noting that they brought on full- and part-time employees to make this happen. He and his partners work full-time at other jobs, balancing that work with the growing brewery business and families.

The growing pains they’re experiencing as their beers increase in popularity and their customer base expands is a good problem for the nascent brewery to have. “In trying to produce more beer given the space that we have, we’re dealing with some spacing issues,” Carter said. That said, they’re determined to figure out how to overcome the challenges as they present themselves.

Fidens had a tasting room, which Carter described as “a glorified garage,” open for five months before COVID-19 hit, and they were serving up about two different beers at a time. When the pandemic came, they switched to the drive-up model that they are using today as the world’s health crisis continues. Having the extra space for brewing and switching to a larger system, they have been able to expand their offerings. Right now, customers can purchase 32-oz. crowlers when they drive up to the brewery, where the overhead deck is open. He likens the set-up to a “drive-in farmers market kind of setting,” noting that they are still figuring out what they’ll do as the weather gets colder.

He does admit that what they miss the most about not having a tasting room is the chance to chat with their clientele about what they’re tasting in the beer. “A lot of times, we get that feedback with customers talking about the beer they had and some of the experiences of the flavor they got from the hops,” Carter said, pointing out that they try to have quick exchanges to connect with customers in the current drive-through model.

He said that people do miss the tasting room, but for now, the trio remains focused on the beer. “The three of us did this on our own, funding it ourselves,” Carter said. “We had to save money anywhere we could. Whenever it came to making the beer, the equipment, we tried to put our money there and focus on the quality of the beer,” he said. “We put all our efforts into making beer—as many different ones as we can as often as we can.”

Fidens’ plan to remain true to their business model of producing high quality styles of beer that they enjoy, while experimenting with variations within that style. “We’re not going to be the brewery that does and has available five different styles of beer when you come to the brewery,” Carter said. When space allows, they may start brewing an additional style, for example, a stout. “Once you get to the stout, there are lots of different ways you can make the stout,” he said. However, thinking about the future in the middle of COVID-19 isn’t easy. “Sometimes it’s hard to think of a month ahead of time, much less the next year or two,” he said.

The owners are intent on creating the type of work environment that they want for themselves as they have fun working through the challenges of owning and operating a brewery. Teamwork is the hallmark of their company culture. Said Carter: “We have three partners that are equally pulling their weight in different ways, coming together for a common mission, and the three guys that work for us now are just as dedicated to seeing this brewery move forward in the hopes of accomplishing something even more. It’s really a product of that—everybody coming together and collectively putting together the effort week after week. Producing 40 different beers and having them enjoyed by the Capital Region is creating a work environment where everybody is putting their own talents into it and helping us push it.”

You can visit this “little lemonade-stand of a brewery” at 10 Walker Way in Colonie. For information on current beers available and drive-through hours, visit www.fidensbrewing.com.